As we are living longer lives while our active population is shrinking due to low fertility rates, the just-concluded Baltic Sea Labour Forum for Sustainable Working Life project looked into issues crucial for the socio-economic growth in the Baltic Sea Region: how to prolong working life and support active ageing.

To address the double-issue of a shrinking and ageing working population, the “Baltic Sea Labour Forum for Sustainable Working Life”project looked into active ageing and the employability of older age groups.

The project, which was managed by the Council of the Baltic Sea States (CBSS) and ran for 3.5 years, specifically focused on the working population in the age group of 55+ in the Baltic Sea Region, and on how to support the improvement of working life conditions and to establish systems and policies for an older labour force.

“We are living longer lives. In combination with low fertility rates, that’s a huge issue because it leads to a shrinking and ageing labour force,”

JOSEFINA HALME, THE CBSS-BASED OFFICER WHO OVERSAW THE IMPLEMENTATION OF THE PROJECT

To help overcome the challenges posed by ageing populations and meet the current and future needs of the labour markets in the Baltic Sea region, the project developed policies for an older labour force – 55 years and above – in support of their employability, the improvement of working life conditions and lifelong learning.

As part of the project, two working groups were established, respectively dealing with working conditions and age management, and with entrepreneurship and job opportunities and for an ageing labour force.

Supported by policy-relevant research on forecasting and analyzing labour market issues, including a “future work” and “qualifications needed” perspective, technological developments and trends in the region, the working groups particularly took into account socio-economic and socio-cultural differences between countries in the region, remembering that the national contexts of the countries differ considerably in the region.

“In the Baltic Sea region, we need a common approach when it comes to an ageing workforce, but also tailored strategies that respond to the different national needs and specificities,”

Under the project, several country reports were developed to highlight the national specificities regarding older workers and to present some of the best practices in the region. In addition, the project also developed a toolbox for transnational cooperation and established a network of experts on the topic in the region.

“The issue of age concerns us all and not just the elderly – especially the way we look at ageing, health, lifelong learning working conditions,” said Halme. “We need to look at ageing in the most holistic manner, and that’s what the project did.”

The project was managed by the Council of the Baltic Sea States, or CBSS, in partnership with the Lewiatan Employers’ organization and the Entrefox project of the Turku University of Applied Sciences. It was funded by the Swedish ESF Council, with additional funding from the Swedish Institute for third-country participation by non-EU countries.

Throughout the project, 10 policy briefs on the ageing workforce have been released in the Sustainable Working Life series. The policy briefs compare the situation in the countries and cover the most important areas of the sustainable working life:

As a complement to the project documentation, seven individual Country Reports have been produced to highlight how different the working life situation is depending on each country. They present a short overview of the national policies of the countries involved in the project: Denmark, Estonia, Finland, Germany, Latvia, Lithuania, Poland.

In addition to the documentation outcome and final recommendations, the project has allowed to create a space for a wide network and broad cooperation between sustainable working life experts in the region. It has become a platform for mutual learning, experience exchange, and discussions that will live far beyond the project.

This April, the Baltic Sea Labour Forum for Sustainable Working Life project organised its 3rd round of digital workshops, providing the opportunity for professionals from multiple sectors in the BSR to gather around themes connected to sustainable and prolonged working life, with a focus on workers aged 55+. This was an opportunity for participants to learn from experts, share experiences and gain understanding of different national contexts. The focus was also on creative brainstorming, looking at solutions and ways forward. These workshops provide grounds for the project to develop policy briefs and policy recommendations to be delivered to decision-makers at the end of the project. This time the themes of our two workshops linked to the project’s two thematic working groups were:

With the support of Swedish Institute, the Baltic Sea Labour Forum for Sustainable Working Life project, besides EU member states, also includes CBSS Member State Russia in its activities. As part of the project, a conference on Lifelong Learning was held on 22 April as a hybrid event in St Petersburg, Russia. The event gathered a  number of prominent experts from the region in the area of adult education and lifelong learning to share their insights and discuss the importance of learning and skills development all through life for sustainable working life. The audience was comprised of Russian stakeholders in-person and a total of 34 participants registered for online participation from other BSR countries.

In 2021, the choice of theme for the annual roundtable of the Baltic Sea Labour Forum – “Remote work as a new reality” – was influenced by the effects of Covid-19 pandemic on working life. The event was organised as a hybrid event in St. Petersburg, where Russian stakeholders participated in person while participants from EU-countries joined digitally.  Several prominent expert speakers from the region participated in the talks, sharing insight and specific national contexts of the region on the topics of digital transformations of working life and its implications, advantages and challenges.

The second Sustainable Working Life project policy brief in the series on prolonging working life looks at the age group 55+ in countries in the Baltic Sea Region. ICT proficiency, the ability to use digital technology and communication tools, is essential for a growing number of jobs today and for accessing services in daily life. Some groups, such as older workers, risk being left behind. We examine determinants of the digital divide in terms of age, educational attainment, and geography. We present perspectives from Finland, Lithuania, and Belarus. In Finland, our example shows how ICT skills training can be effectively integrated at workplaces.

The first Sustainable Working Life project policy brief in the series of eigth is out today! Read it now and subscribe to the newsletter to be the first to receive new policy briefs as they come out.

The policy briefs are the outcome of the discussions and months of work of our Sustainable Working Life Project multi-national and multi-disciplinary Thematic Working Groups made up of experts from around the Baltic Sea Region.

This policy brief looks at the conditions of women in the age group 55+ who face particular challenges related to remaining in working life – one of them finding a work/life balance. Here we look at the situation in the countries in the Baltic Sea Region, including closer perspectives from Poland, Sweden and Lithuania. Our focus is on women’s care-giving duties and the implications of women’s dual roles in the domestic and professional spheres on health, well-being, economic situation, and decision to retire early. We examine different caregiving models and argue that these can play a crucial role in both supporting and preventing women from remaining in working life longer.

See one of our Thematic Working Group experts Sonia Buchholtz – Economic Expert at Lewiatan and Researcher at the Warsaw School of Economics – summarising the situation in the Baltic Sea Region:

Learn more about it from the Project Officer Josefina Halme:

CBSS Labour Ministry and employer/employee and trade organisation representatives will gather virtually on Monday for a discussion on current developments in the labour markets in their respective countries/organisations and the progress of the ongoing “Sustainable Working Life” project.

The labour markets everywhere are experiencing extraordinary changes and collaboration in the area will be necessary to ensure employment sustainability in the future. Despite the partners of Sustainable Working Life project not being able to meet physically as planned, the two Thematic Working Groups focusing on Age Management and Working Conditions and Job opportunities and Entrepreneurship have met in online workshops to continue working on policy recommendations for a more sustainable and inclusive labour market. 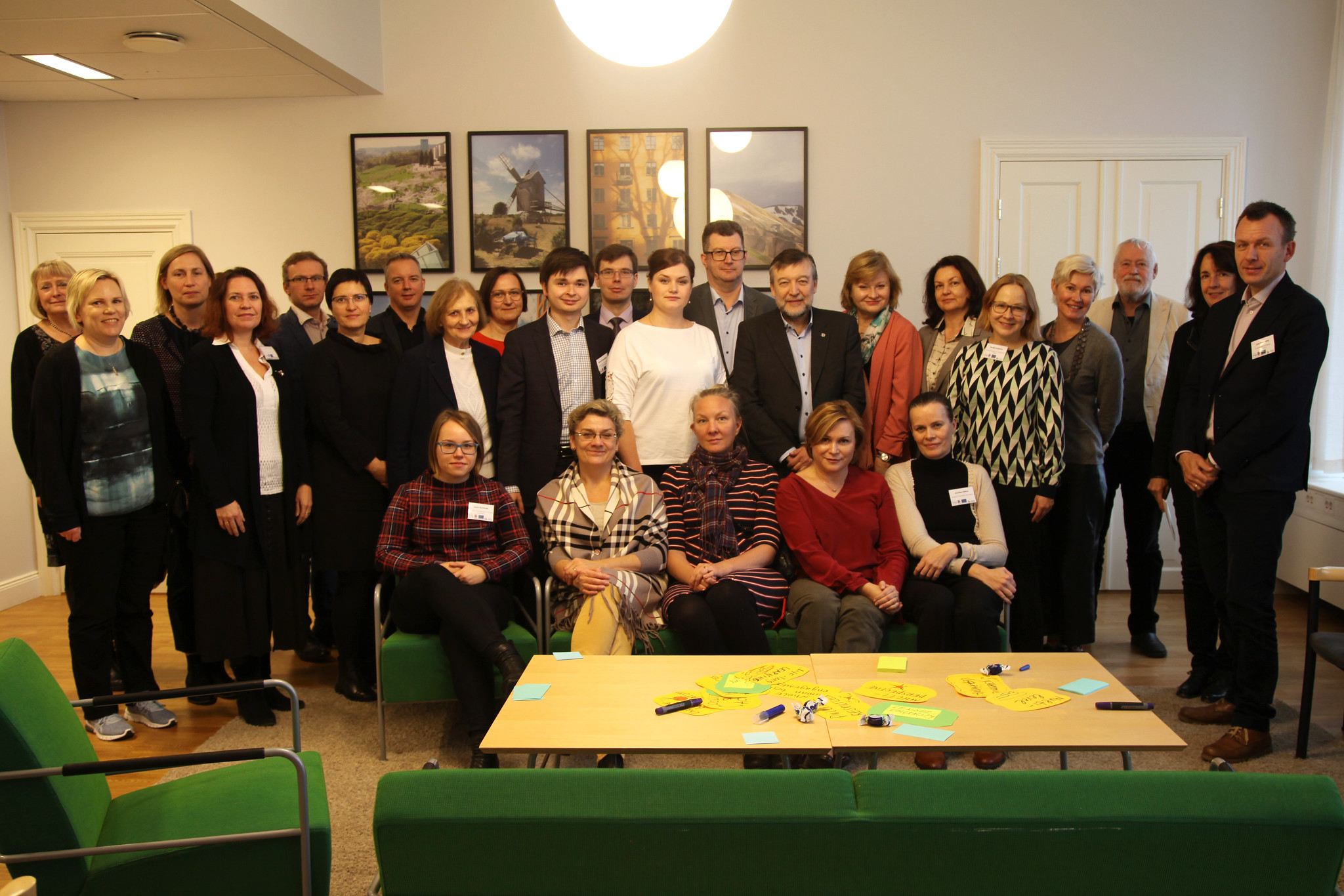 This event marks the beginning of the work of the two TWGs – Age Management and Working Conditions (I) and Future Job Opportunities for an Ageing Work Force, including Entrepreneurship(II), supported by expertise in Lifelong Learning and Active Ageing. The TWGs will identify good practices and assess ongoing initiatives to come up with actionable policy recommendations to better address the demographic challenge of ageing populations and lower fertility rates and its effects on the labour markets in the Baltic Sea Region. The TWGs will further focus on finding measures to strengthen synergies between education and employment for people aged 55+ in order to meet the skills and requirements of the future labour market.

This was the first occasion for all the members of the two TWGs to meet: they come from nine different countries, comprising a diverse group of experts representing employers’ organisations, trade unions, government and academia experienced in the areas of active ageing and lifelong learning.

To kick things off and ensure synergies in our work, the members of the TWGs were provided with relevant information about the project’s alignment with the EU Strategy for the Baltic Sea Region, the EU Pillars of Social Rights and ESF horizontal principles of equality, non-discrimination and accessibility – these are the underlying values of the project.

With so many likeminded and knowledgeable people coming together around a common issue that concerns the whole Baltic Sea Region, there was a high level of motivation and engagement in the workshops of the TWGs during the event. Having laid the grounds for continuing work, the members were able to establish the activities of the project in terms of co-creation processes and priorities of the themes of the project.

The TWGs will focus, among other things, on labour mobility and smooth transition between positions later in life; will examine what “work” means to different people in order to better promote lifelong learning; what skills are necessary to enable people to meet the requirements of the future job market and to remain in work later in life and what conditions facilitate their development; as well as investigate the many internal and external factors that affect the decision-making process when considering staying in the labour market from a multi-stakeholder perspective (individuals, organisations, governments, etc).

Our project is turning a challenge into an opportunity: Sustainable Working Life, through the elements of Active Ageing and Lifelong Learning at its core, will propose recommendations for adapting and improving working conditions, skills development and provisions of adult education in order to support people in engaging and remaining in work throughout an extended working life.

High-Level Meeting of the Council of the Baltic Sea States Ministers of Labour and Social Affairs took place on the 26th of August, during the 28th Baltic Sea Parliamentary Conference in Oslo, Norway.

Our Director General Ambassador Maira Mora and Pyry Niemi, BSPC rapporteur on labour issues, opened the meeting where representatives of the Ministries of Labour took a stand on the issues defined in Berlin Declaration, focusing on the future of work, demographic challenges and sustainable inclusive labour market in the Baltic Sea region. The representatives agreed that the Berlin Declaration was still very much relevant, especially when it comes to regional cooperation: even though there is no one fix for the whole region, exchanging national experiences can be beneficial in developing solutions.

The meeting was followed by the Baltic Sea Parliamentary Conference (BSPC), that also included a session on the future of work in the Baltic Sea Region.